I’ve mentioned this in a couple of other posts, but the short story is that I’m in the process of building a model rocket with an electronics package to do some telemetry and messaging via APRS, and LoRa, during a short rocket flight. If you follow me on twitter (@n3vem) or on mastodon (@n3vem@mastodon.radio) you’ve likely already seen some posts about this. I have started to get some static pages on that project posted here, and I also finally set up a github repo so that I’d have a place to start dumping code and such, in case anyone wants to peek under the hood. There isn’t a whole lot there, but I’ll try to keep that stuff updated.

The real reason for this post, is because I wanted to share a little bit of history about how I got here with this project, and also maybe make some hams aware of the already existing crossover between our hobby, and the rocketry hobby.

History of My Rocketry Hobby

I was into rocketry long before I was into ham radio - I started with the basic Estes kits that a lot folx are familar with, and had a blast flying those small rockets. As I got older, I learned about Mid-Power and High-Power rocketry. The National Assocation of Rocketry and Tripoli are essentially the ARRL and RAC of Rocketry. They both have good information on the topic, but essentially Mid-Power rockets pick up where those Estes models of our youth leave off, and are rockets that fly on E, F, and G sized motors - the biggest that you can fly without being certified. High-Power rockets require certifications to fly, FAA clearance’s before flights, and a whole host of other precautions. Commercial motors for these rockets fall in the H, I, J, K, L, M, N, and O range.

As a teenager I built and launched several Mid-Power kits. I also built a rocket to use for level 1 certification, but drifted away from the hobby before ever doing a certification flight. I still had lots of fond memories of rocket flights however! 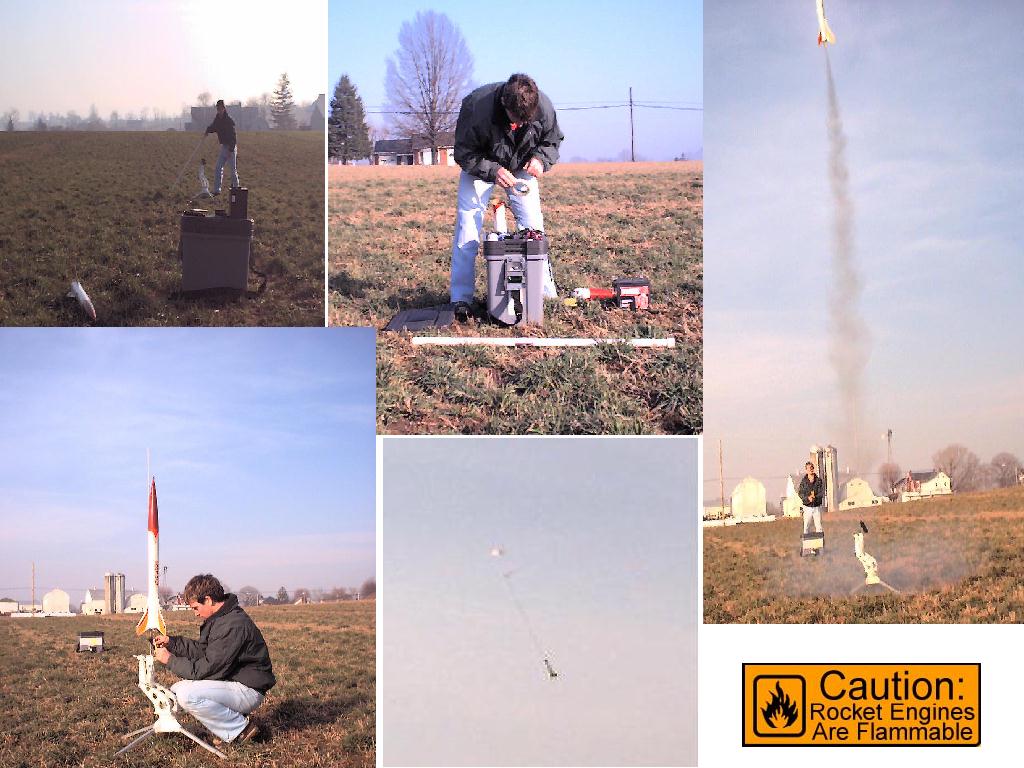 The biggest rocket I flew as a teenager was a mid-power rocket that flew on a cluster of 2 G motors ignited at once - i.e. the absolute limit of what can be done without getting certified. 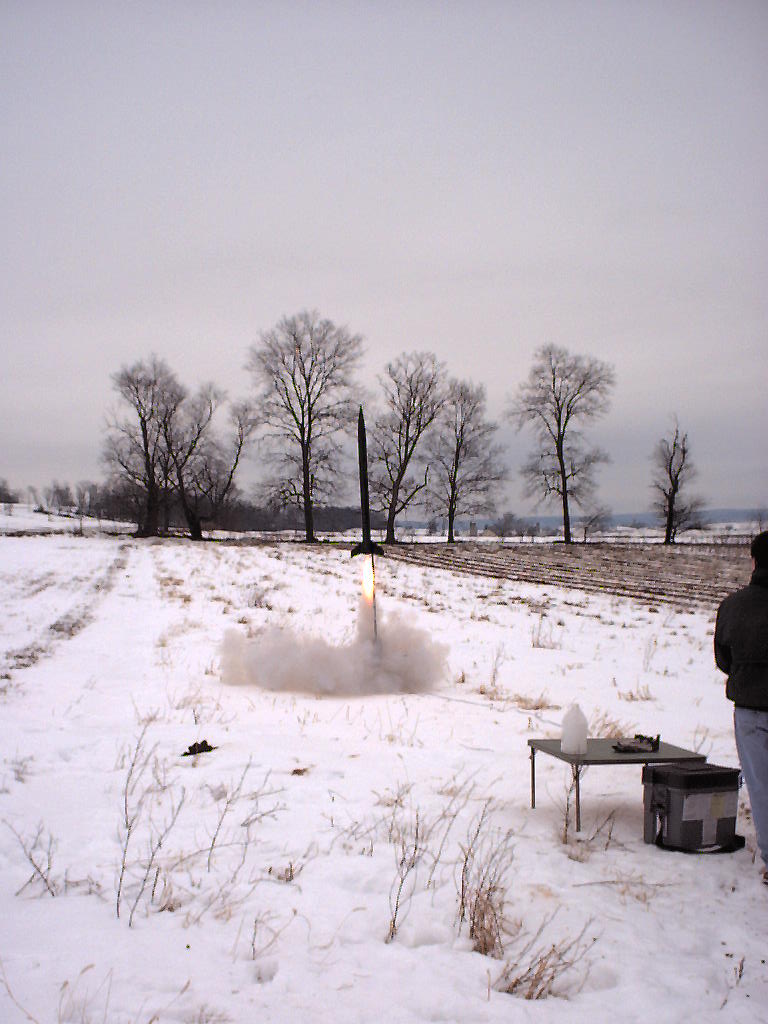 Even back then folx were putting small transmitters in their rockets, and using radio direction finding to help locate the really big rockets, since they often fly out of sight, and can hard to find when they land.

Getting Into Rockets Again

A few years in the bag, and now I’m a ham, but more importantly I also have kids. As fate would have it, my now 6 year old got curious about the big rockets that have basically just been decoration in my office, so we ended up getting him his own small kit. The hook was set after his first launch. His big sister got in on the fun and built one of the classics - a Big Bertha kit. Since the kids are now actively building rockets, I was sucked right back in, but really wanted to tie it in with my radio hobby.

As I mentioned - radios in rockets is nothing new, but I figured it would make for something fun to play around with. I was familar with APRS tracking of High Altitude Baloons because there has been quite a lot written about that, so I figured that would be a good place to start. I picked up a LightAPRS tracker from QRP Labs, and started playing around with that on the workbench. The ‘default’ code that the directions have you load up is optomized for baloons which go higher, and are in the air longer. Rocket flights are short - Mid-Power is often only 60-90 seconds up and down, so I fiddled around with the code until I had something that would send packets about every 1.5 seconds - that way I’d be able to get somewhere in the range of 50-70 packets sent during the rocket flight. That code itself is in the github repo I mentioned earlier.

I wasn’t happy with just APRS though, I wanted to ‘do’ some radio stuff. There’s been lots of chatter about LoRa in certain ham radio circles lately, so I figured I’d give it a go. Adafrut even has some of their feather modules availabe with LoRa radio’s that work in our 70cm band, which as hams, we have a lot of flexibility with, as compared to someone using them in ISM bands. I nabbed up a couple of those, and some sensors to play around with. What I ended up with, and where the project stands now, is as follows:

The rocket itself started as the exact same one pictured in the collage above, but made longer and repainted, so that it looks like what you see now. I have some decals that I want to get added, once I can finish making up the .svg files, and drop them and some vinyl off to my sister who should be able to whip them out on her cricut machine. 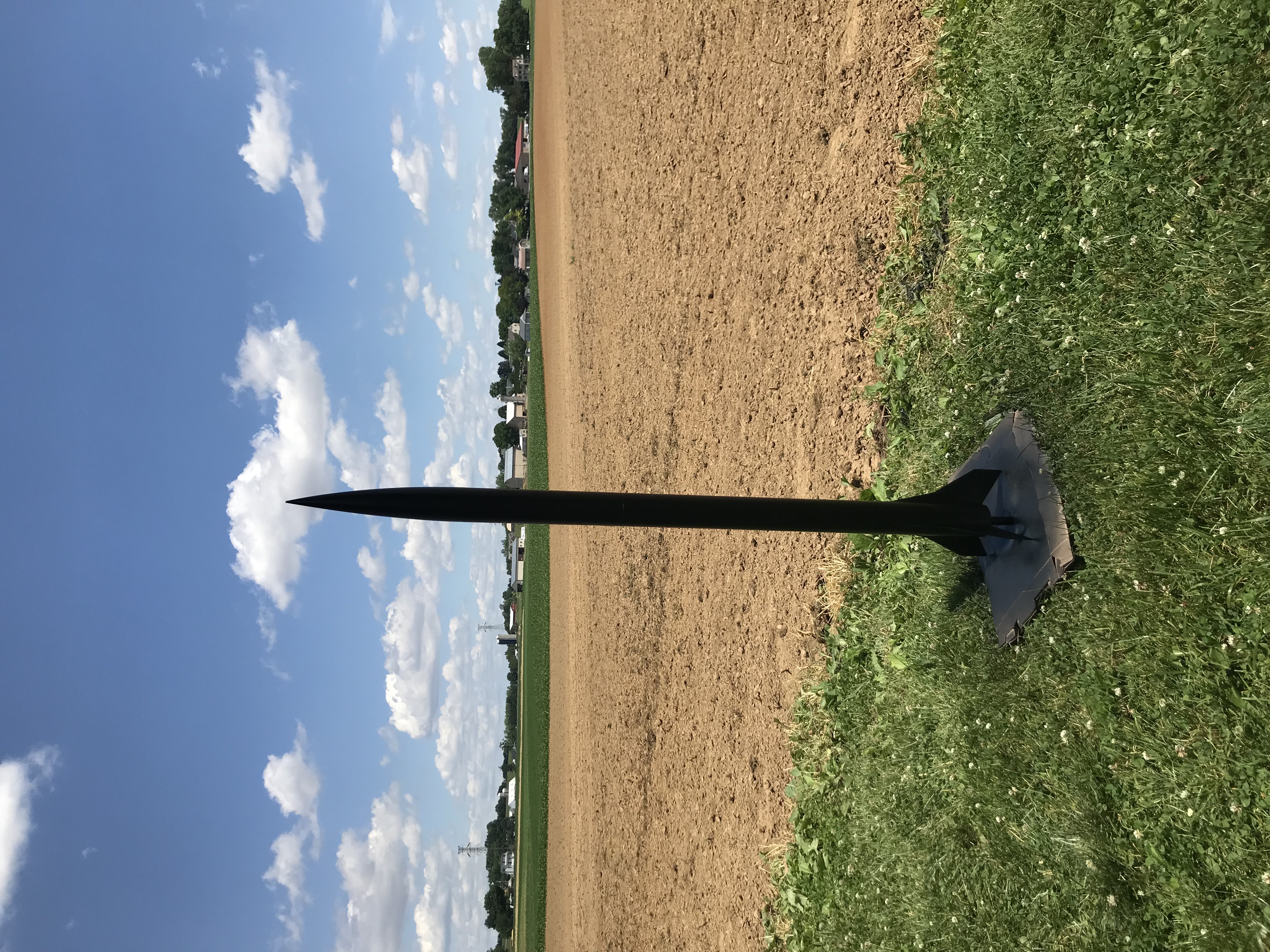 I ended up building a sled and mounting up the lightAPRS, Feather Modules, some sensors, and a power-supply, on a peice of proto-board. I went through several iterations playing around with it, but ended up with this: 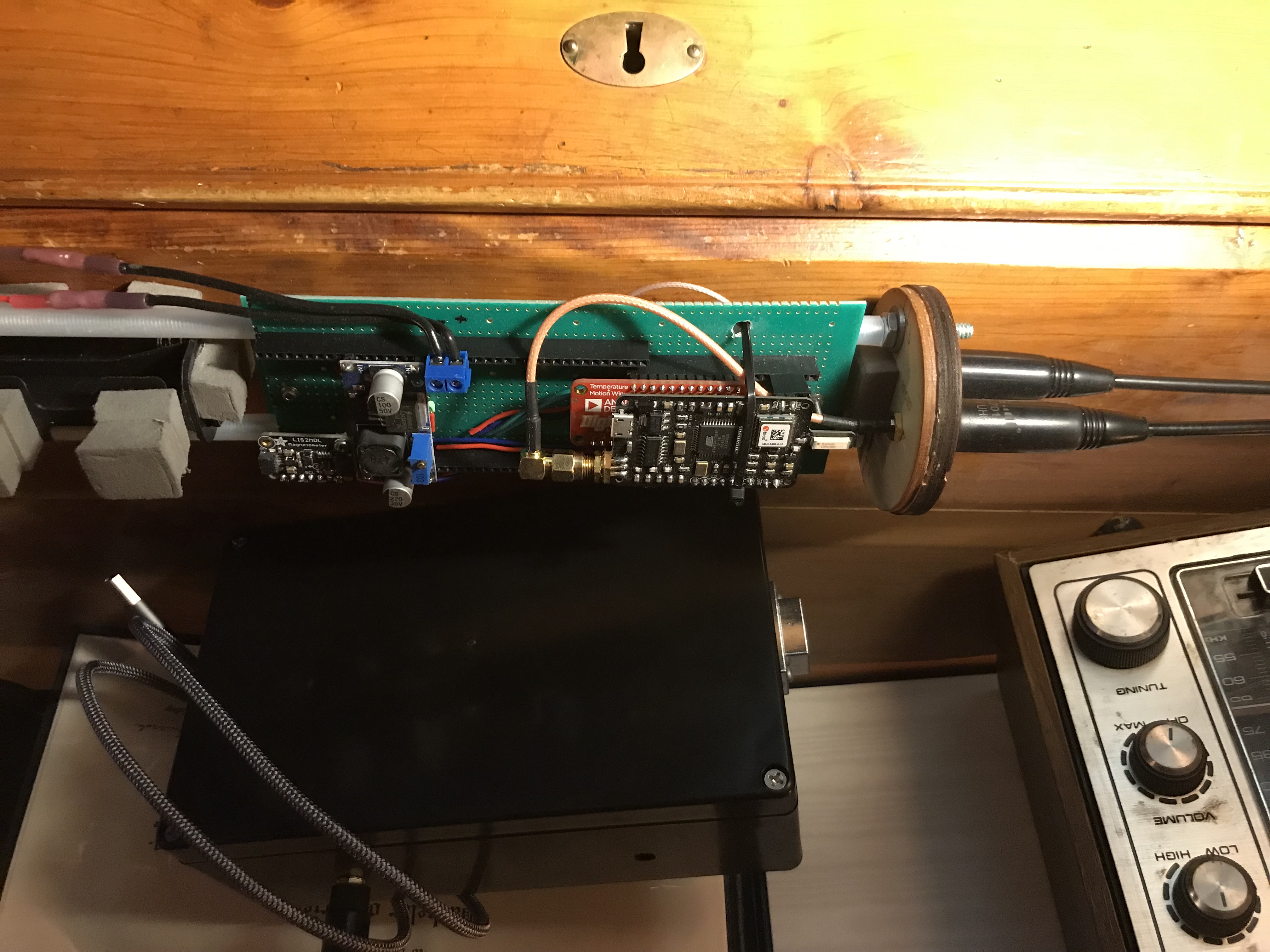 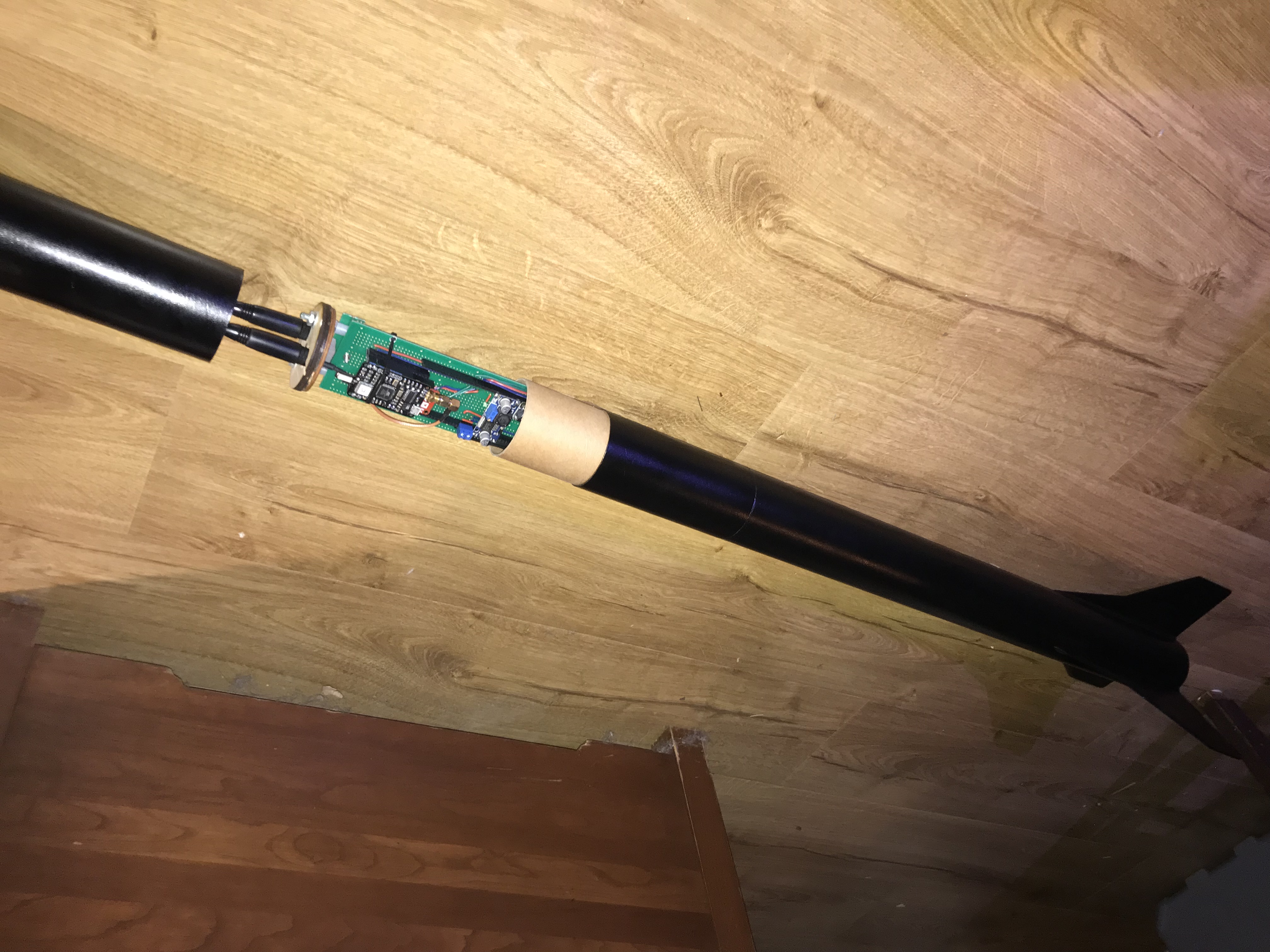 The code running in the rocket does 2 primary things. It reads sensor data, and sends packets of .json data, and it also acts a basic digipeater so that stations on the ground can actaully send messages addressed to the rocket, for it to relay. This basically means that during the flight, stations that have LoRa radios can do keyboard to keyboard messaging, through the rocket. It’s nothing fancy, but it should be a fun thing to play with once I start doing some launches.

The ground station is also nothing fancy just yet, but I do have plans :-) At the moment, it’s just the second feather radio in a box, that I can plug into my laptop. It receives packets, and spits them out the serial port, and listens on the serial port, and transmits any messages that are sent in. 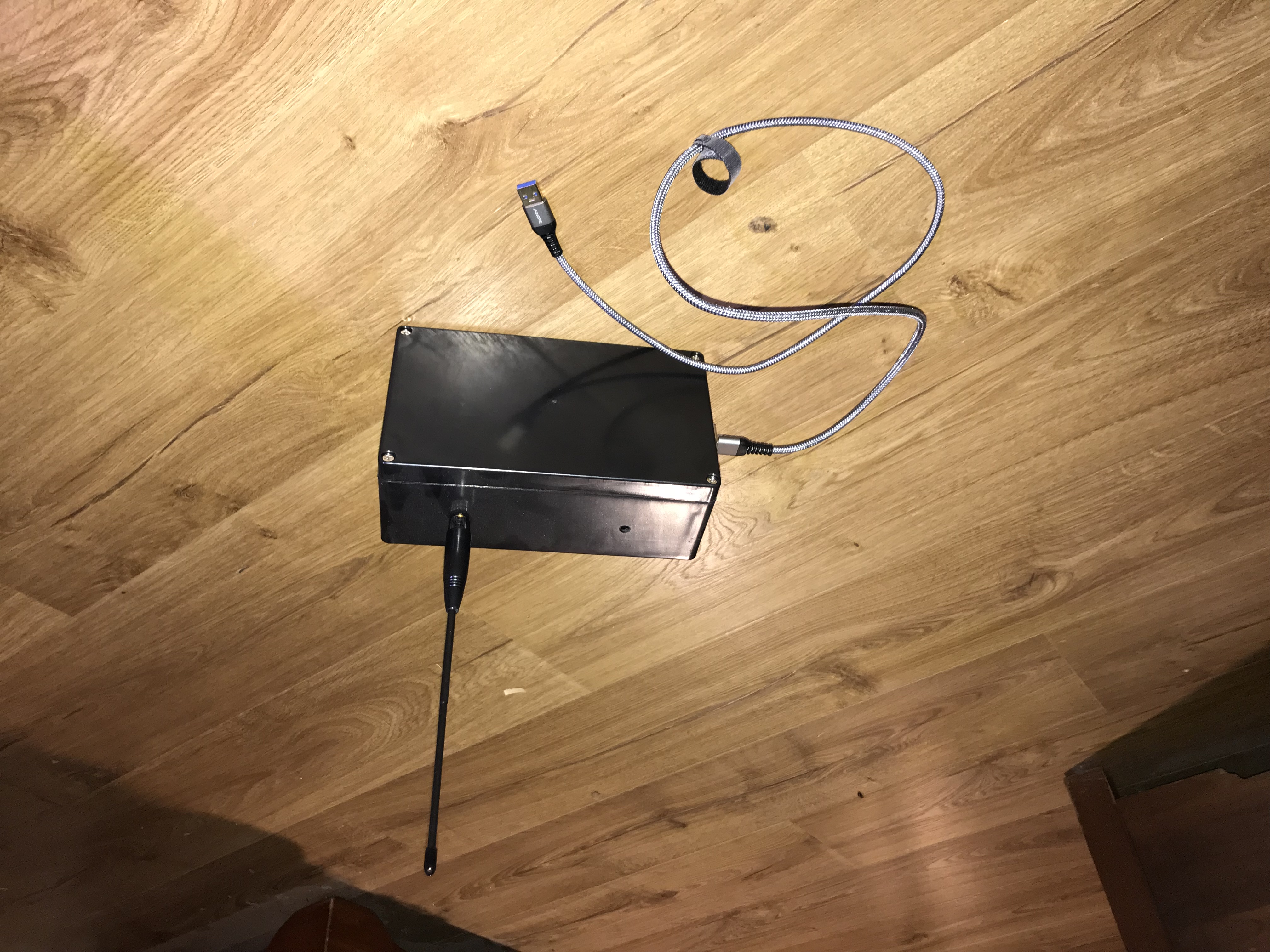 The more intersting thing that I’m doing with the ground station, is making a dashboard to be able to watch live telemetry. I’ve got node-red installed on my laptop currently, and I have a flow that reads the serial data, and displays it on some gauges. I also have a ‘chat window’ to send messages back to the rocket to take advantage of the message repeating service that also runs on the rocket. In theory, anyone could duplicate this ground station setup, and receive the rocket’s telemtery, and then send messages back and forth via the rocket.

I have a laundry list of things I want to do for this project, but before I get too carried away, I want to launch it! In order to get to the first proof of concept lanch, There isn’t really much left to do:

Simluations tell me that I should get about 1,157ft out of this flight, top speed should be 267 ft/s, and the rocket should reach apogee in 8.85 seconds. Total flight time should be just over a minute, with most of the time being spent under parachute on the way back down. 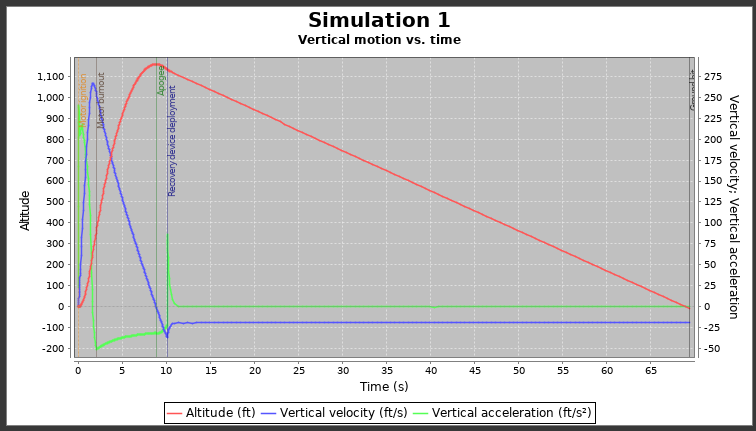 Like any good ham, I’ve already got ideas. Some I’ll likely start working on right away, and some will wait till after the POC launch:

For now I plan on maximizing what I can do without getting High-Power certified. I do think I’d like to get certified some day, and take this project to new heights (see what I did there?) but that requires a bunch of coordination, travel to club sights that have the room for it (there aren’t any super close to me) etc.

In order to get the most I can out of Mid-Power rockets, I’m already scheeming a Radio-Rocket-Two.

Keep Up to Date with N3VEM
Ham radio excitement, in your inbox!